A week ago I started testing a new spread I’ve designed for asking whether a particular politician will be prone to keeping his or her promises, or to forsaking them. Here’s a link to the post I wrote about President Barack Obama, in case you missed it. This time, I’m going to try out my political cheating spread on Mitt Romney.

Here’s how the political cheating spread works. Lay out four cards, with three laid in a row across the top, and the fourth card on the bottom. The significance of the card placement is as follows:

1. motivation: what is this politician’s reason for making promises?

2. backbone: what is the basis for this politician’s staying power?

3. temptation: what would cause this politician to stray?

4. bottom line: what is this politician’s overall level of true commitment to his or her promises?

Please try this spread yourself at home, either with the politicians I am reading about, or others (maybe your local candidates?) and let me know your results in the comments section. But for now, let’s turn to Mitt Romney. Here are my cards: 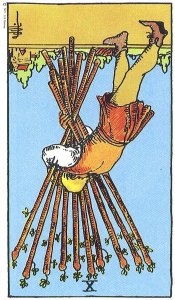 1. motivation: reversed Ten of Wands. What a coincidence! That’s the same card I pulled for Obama in this position (though for Obama I also drew the Five of Wands, which jumped out of the deck at me along with the Wands). Like Obama, Romney has a lot of ideas to carry around, and he expects to need each and every one of them. For both politicians, each idea committed to represents a responsibility to someone or to some group. Each promise made weighs these politicians down more and more — by the end of a campaign, they must feel as though their backs are about to break. But though I drew the same card for both, I don’t think Romney views the campaign as the fight that Obama sees it as. I think Romney may honestly think that he can work hard and succeed, and that his success in this campaign will be directly related to how hard he works. He’s forgotten that each campaign has more than one candidate in it. Do you see how the figure on the Ten of Wands is looking at the ground? Romney is focused on his own ideas and his own path, and isn’t thinking about how his path will intersect with that of his opponent. Obama has never forgotten that their paths will meet from time to time.

So what does any of this say about Romney’s attitude toward his promises? Making promises is part of the work of campaigning, that’s all. That’s why he makes promises. For him it’s just part of working hard and getting ahead.

For either politician, I would have liked to see a little more heart commitment to their promises, but I didn’t. Oh well.

2. backbone: Queen of Pentacles. Again with the money and resources (do you see 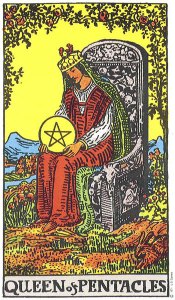 the large coin in the Queen’s lap?) — you just can’t run a campaign without them. This makes me sad, but the truth is that you probably won’t find a politician whose commitment to his promises is rooted in moral fiber. What I see here, for Romney and for other politicians, is that much of his strength and staying power comes from his sponsors. However, there is one particular source of support that means more than the others: his wife. And there’s the heart commitment I was looking for. If she supports the ideas that Romney has committed to, she will help him to hold steady and maintain the course. If he views betraying his campaign promises as potentially disappointing her, and I suspect he probably does, then he’ll be motivated to hold firm. His marriage has the ability to turn Romney into a romantic idealist — something he is far from being in the other aspects of his life. 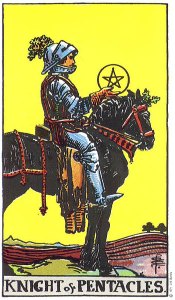 3. temptation: Knight of Pentacles. Money is the root of much temptation in life, and it’s Romney’s Achilles’ heel. He’s not an adventurous person, and he doesn’t like risks. He believes in attention to detail, and money is a major detail. Romney believes that you have to be practical, and if your ideas do not have financial support, then you’re wasting your time with them. If the money for his ideas disappears, his commitment to those ideas will waver. This is a candidate who needs to know that he’s got all his ducks in a row (or all his seeds planted, to use the image on the Knight of Pentacles card — do you see the furrows in the field just beyond the Knight?).

4. bottom line: Nine of Wands. Romney plans to stick with his ideas to the end, and he’s a man who, when he has planned to do something, he does it. He doesn’t want to have to defend his ideas and he’s not the world’s greatest fighter. But he’s got some tenacity and endurance. He can persevere. If he has to take that last idea (the wand held in the Nine of Wands figure’s hands) and crawl over the finish line with it, he will still get it there. And what happens once he crosses the finish line? What happens then, as far as Romney is concerned, is what he planned to have happen. 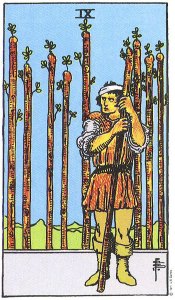 But — I wonder if he has considered what his course of action will be if something unexpected occurs? I don’t see this man as being someone who has a lot of imagination. I don’t see him envisioning having to get creative to make his plans a reality. He believes you just keep going and keep putting one foot in front of the other. And that’s not an ineffective way to proceed — it certainly has gotten him this far. But just what will he do if something unusual happens? How will he adapt? I wonder.

I don’t see, in Romney, the same intellectual arrogance that I see in Obama, but I also don’t see the ability to creatively adapt to changing circumstances that Obama has in spades. I don’t see much vision in someone who simply keeps working and looking straight at the road just under his feet. You have to look ahead, up the road, for that. Obama is looking up the road; Romney isn’t. Obama has looked around and scoped out the situation, and probably knows when he’s being used as a tool (nobody could come out of Chicago politics and not know that). The thought that maybe he’s being used as a tool by strategic interests is an idea that I don’t think has entered Mitt Romney’s head yet (or if it has, he hasn’t yet realized how big a deal it is, because so far it isn’t a fact that has interfered with his own plans). I think he earnestly believes he got into the position he’s in by working hard (which is probably partially but definitely not entirely true).

So on the one hand we have a scrappy fighter who knows the lay of the land and will shift around as needed to ensure his own political survival (Obama) and who also thinks he knows better than most people what is in the country’s best interest, anyway. And though Obama’s arrogance is a dangerous thing, at the same time, like many of our most deeply held beliefs, it’s rooted in something real, which is that he’s smart, well-educated, and cynical enough and creative enough to adapt to changing political realities. The question for me, when it comes to Obama, is: will he know when to drop the political posturing and adapting and simply commit his heart and soul to something important?

On the other hand, in Romney, we have a plodding planner with strong special interests behind him, yet who will if nothing else stick to his plans and his goals (even if something happens that causes them to become irrelevant). Who is more likely to keep his promises? Romney, without a doubt. In sticking to his policies so doggedly, though, will Romney risk giving up power to those who have their heads up and are looking around and feeling out the lay of the land? Will he end up being only a tool? This is the danger that Romney’s supporters should seriously consider — because it would be like having no President at all.

This whole exercise brings out another point: how much do we truly want our politicians to stick to their promises? I wasn’t happy when Obama broke his, but I can understand, if not forgive him, when I look more carefully at the underlying situation. What do the rest of you think? Please feel free to raise these questions and any others that you’d like to bring up, in the comments section below.