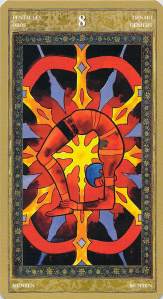 It looks like yesterday’s doubts and self-doubts have given way, somehow, to a greater sense of security and trust. It’s not that circumstances have changed — it’s that we have. In the Yoga Tarot, the Eight of Pentacles is presented as an axis of abundance and equilibrium, while the Four of Chalices is an axis of trust and hopes. And I’m sure you haven’t missed the fact that eight is divisible by four. In a nutshell, what this tells us is that our sense of abundance and equilibrium in life comes from our willingness to trust and hope — it relies, in fact, on a double dose of trust and hope, just as eight relies on the number four doubled. Therefore, although I drew the Four of Chalices second today, I want to talk about it first — because it lays the foundation for the Eight of Pentacles.

Notice that the yogi on the Four of Chalices card is in triangle pose. This may seem wrong to you, since triangles have three corners and this is a Four card. However, I’m looking at, and I presume the artist was thinking of, the four limbs of the yogi — three touching the ground, representing a strong connection to the earth, and one reaching up longingly toward the sky. If you can (i.e., you’re not reading this on an airplane or something), take a moment and do triangle pose. Notice that you must open your heart chakra area up wide in order to have good body mechanics for this pose. Trust, and hope, depend on opening the heart without knowing for sure whether it is safe to do so. Actually, almost all progress in life depends on our willingness to open the heart without really being sure that it is safe to do so. This opening of the heart makes us vulnerable, yes — but not as vulnerable as we will be when we get to the Eight of Pentacles backbend!

But we’re not there yet. Notice also the mountain on the Four of Chalices card. It is not commonly recognized that mountains, rocks basically, are a potential source of emotional support for us. We recognize rocks as symbols when we give them to each other as pieces of jewelry, but we don’t often recognize their true power to provide emotional support. Now you’re thinking that I’m crazy (um, Bonnie, they’re just rocks…) but, hear me out. Rocks, crystals, mountains, all have the ability to clear negative energy from your aura. They can literally take the sting out of emotional pain. They draw pain and negative energy out. If you don’t believe me, then you haven’t tried working with them yet!

Coming finally to the Eight of Pentacles. True strength is based on flexibility and patience. We’ve all heard the cliché about the simple willow being stronger than the mightiest oak — but it became a cliché because it represents an important truth. Fundamentally, our basic security in life — our root chakra security, depicted in this card by the color red and representing our most basic and primal needs for physical wellness and a loving family — THIS type of security depends on our ability to bend, and to not be utterly rigid. When we develop the ability to bend and to be flexible in our views and in our approaches to all sorts of problems, we find that family issues and basic security problems that seemed struck and entrenched in our lives suddenly start to move and come loose.

So that’s the basic message for today: when we act with trust and hope, our most basic problems begin to resolve and the stuck blocked issues that we were pushing and pulling on begin to come loose. Finally! All this because we were willing to open our hearts a little and take a chance. All this because, instead of reacting to fear and anxiety and depression by curling up in a closet in a fetal position, we instead chose to go out into the world and be vulnerable, at a time when it was the last thing we felt like doing (especially when it’s 99 degrees and humid out there!). Think about that.