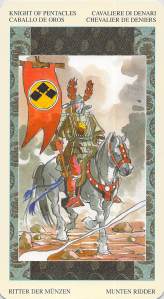 In the Samurai Tarot, the Knight of Pentacles is represented by Minamoto no Yoritomo, the first Shogun. Combine him with the Empress, depicted here in armor with a spear in her hand, and I see these cards as being about taking power — but taking power not just with brute strength and force, but with careful planning and strategy. While the images here may seem to hint at violence, we can interpret them as having more to do with simply taking control of our own lives. That means setting goals and making plans — and brooking no resistance!

Women sometimes have trouble relating to these images. Samurai in armor? Spears? Getting ready for battle? Don’t be put off by this. Our lives ARE a struggle, a metaphorical battle (and sometimes a literal one). And we do have to have strong spirits like the samurai and be willing to think in terms of taking control of a situation. Being ethically committed to peace (and I’m a lifelong pacifist personally) does not mean that we have to be doormats. We can still take up arms, hold our ground, set goals and carry out plans, and powerful consolidate our gains until we have reached a position in which we feel we have the level of control we need to actually manifest those goals. Arms don’t have to be used for conquest (but is conquest always bad? what about a conquest that is aimed at bringing about benevolent peaceful government?), but can be used to set limits and enforce ethical behavior. That’s a fine line to walk, and yes, power does corrupt. So it’s necessary to be careful about this and to stay in touch with ethical touchstones, refuse to be ruled by ego, and take time for meditation and reflection about one’s own actions. That said–don’t be afraid to take control and use forceful means when they are appropriate. Step sincerely and honestly into your truth, and step courageously into your power. And look that challenging situation, whatever it may be, full in the face.