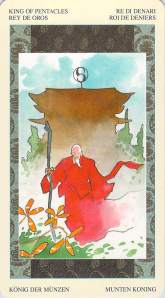 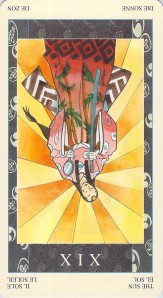 Today the King of Pentacles appears in our cards, represented by Kukai, the founder of Japan’s Shingon school of Buddhism. (For those who, like me, don’t speak Japanese, Shingon is the Japanese word for mantra.) Kukai dropped out of college, began studying Buddhism as an ascetic mendicant monk living in the mountains, and eventually traveled to China to learn from Shingon Buddhism’s Third Patriarch and ultimately becoming its Fourth Patriarch before returning to Japan. (For more details on this, see the Stanford Encyclopedia of Philosophy.)

Kukai’s teaching was based on the idea that Buddhist dharma is embodied, not only in our own bodies but in the entire cosmos and all that happens in it. We can look for teaching to ourselves, to our worlds, to all that occurs.

It’s interesting that The Sun appears in today’s cards with Kukai, because Kukai was very interested in the Buddha Dainichi, or “Great Sun,” a being whose light is said to illuminate and enlighten all beings. In Shingon Buddhism, all deities are regarded as emanations or manifestations of this light. For Christians, refer to John 8:12, “I am the light of the world; anyone who follows me will not be walking in the dark; he will have the light of life.” It is not only all deities, but all beings, who shine with this light (we all have buddha-nature, even a mosquito, and even people who behave in terrible ways have that divine spark somewhere within, though it may be heavily guarded).

But the Sun here is reversed. We are not being enlightened. Has a cloud passed in front of the Sun? Is there an eclipse? Are we living in a cave? Even so, look around you at the world and see the embodied teachings, in yourself, in nature, in all things, all people, and all events. We don’t have to read books and words. Instead we can read our world and ourselves. Let the world be your Bible today. Turn the enlightenment of the Sun right side up again. Let go of the blocks and armor that are getting in the way of spiritual realization. Be content with being, as Rumi said, “the entire ocean in a single drop.”