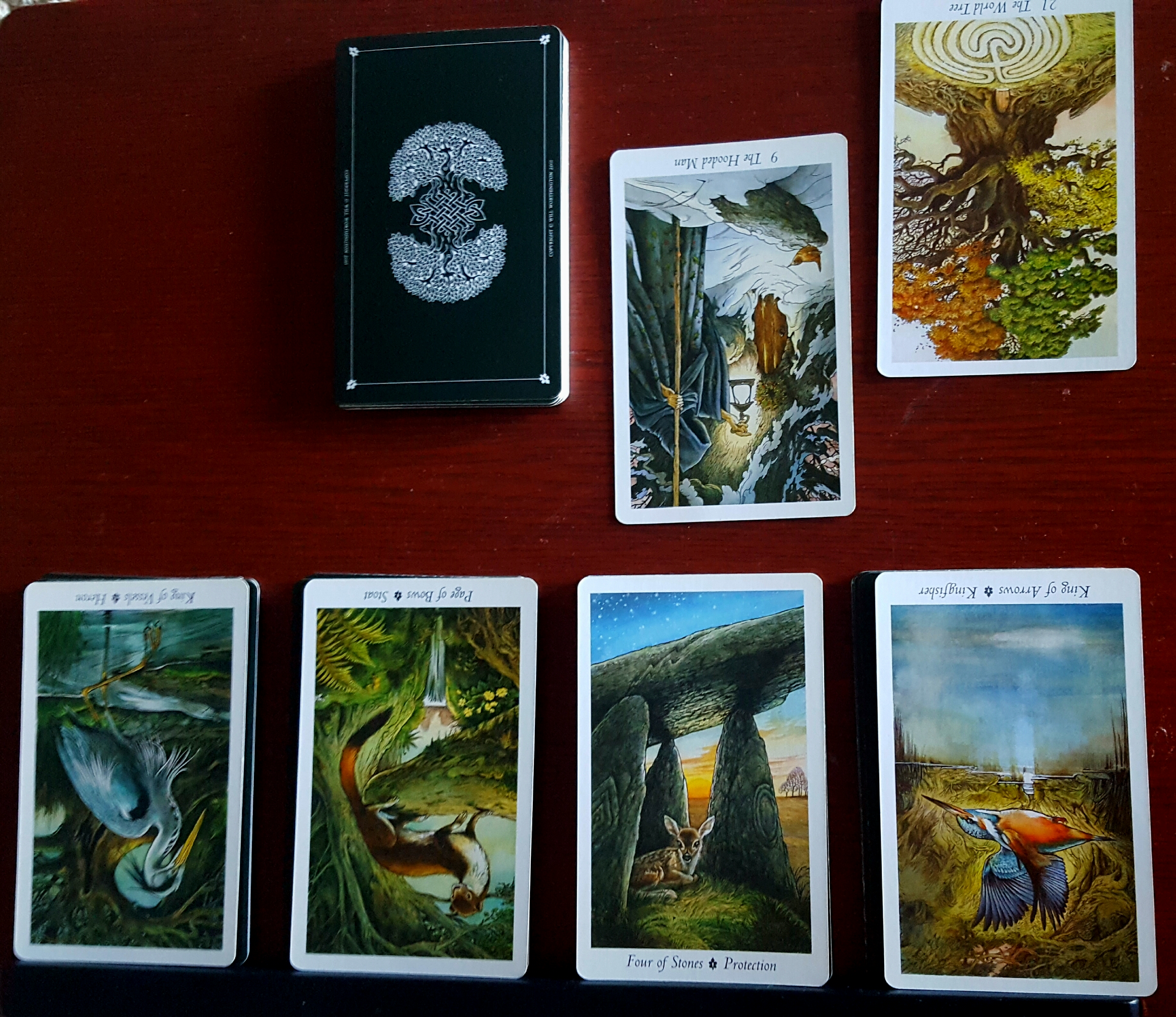 Well, that all might be none of your business.

I think it’s worth saying a word or two here about privacy. Despite being a nosy Scorpio, I don’t go around reading tarot about all my friends and family members to see what’s going on with them. Why? First of all, I don’t have that kind of time. But more importantly, ethically, I don’t believe in prying without a good reason. A good reason could be:

(I couldn’t resist throwing that last one in, this year!) There might be other good reasons, but you get the general idea–if a person’s life is intimately intertwined with yours in ways that give you some standing to want to know how things are going, then it’s more understandable that you would choose to read about that person in the tarot. If not, then you might want to think twice about doing this profile spread. Because, ethics.

So, with all that in mind, here’s an example spread. I used the Wildwood Tarot, but before I started, I divided the deck into five piles: one pile for each suit, and one for the major arcana. I shuffled and cut the piles, placing them as shown in the photo, and then turned over the top card in each pile. For the major arcana, I also drew the bottom card and turned it over. In case you’re curious, I was inspired to develop this spread after seeing a spread on Tumblr that focused on the question of “can I trust this person?” However, I think this spread tells us a lot more than whether we can trust the person in question–and I also don’t think it actually covers the question of “can I trust him or her?” We can look at the information and consider what we know and don’t know, but whether to trust or not really is a very subjective personal choice. There’s no right or wrong to trust.

And here is what I see.

For this person, I drew two Kings upside down: the King of Vessels (aka the King of Cups) and the King of Arrows (aka the King of Swords). It seems to me that this is a person with a tremendous amount of emotional depth, and someone who is also a master of logic and words. However, both these Kings are reversed, and I think that, though this person has such maturity and command in these areas, he (this person is male) may be feeling a bit shaken at the moment–something has shaken his confidence, and he has temporarily abdicated his throne. He’s feeling rather humbled.

Looking at the state of his motivation, through the suit of Bows (aka Wands), I see the same thing: the Page of Bows (aka the Page of Wands) reversed. In the Wildwood, this is the stoat, and he’s standing on a fallen log, basically testing the wind. He seems so sensitive to every little sound or sight or smell. He’s not quite sure what direction to go and is flooding the environment with his awareness to gather as many clues as he can. Which way is safe?

Because safety is a priority, when I look at the suit of Stones (aka Pentacles). There, upright, and, in fact, the only upright card in this reading, I see the Four of Stones, a faun taking shelter under some stones. The card says “Protection.” And the other side of this card, I’ve always thought, especially when I think of it as the Four of Pentacles in the Rider Waite, is fear. In the Rider Waite we would see a person holding on tight to every pentacle he’s got. Fear. Fear of loss. Fear of not being safe. And the desire to be safe and protected and not beset by problems.

That fear is what has toppled the two kings and left them scrambling to get back on their thrones. That’s what has shaken them. Past problems have left them wondering, am I really good at this shit? But the answer, though they may not realize it, is yes, you are good at this shit, that’s why you’re the King! It’s okay, even Kings can experience a crisis of confidence that sends them into a cave to huddle and regroup.

Because that’s what this person is doing. From the major arcana, we have the Hooded Man (aka the Hermit). He’s reversed, too. This is that moment of “let’s stay in a cozy cave and do some self reflection.” It’s not really self reflection for its own sake, but for the sake of understanding what he has been through and how to proceed from here. Which is fine. I know there’s a lot of buzz around getting out of your comfort zone and how good that is for you, and I believe that getting out of one’s comfort zone is beneficial at certain times, but I also think there’s a time and a place for using your comfort zone as a sanctuary and a place to safely regroup–and now, during Mercury retrograde, is actually a pretty good time for that. It’s really okay to turn into a hermit from time to time.

What’s at the root of all this? The World Tree (aka the World), reversed. I love this card, which shows all the seasons of the year and a labyrinth in front of the tree. I think it’s just time for this. It’s the season for it. All things in nature must experience adversity in order to grow. Us included. The tree included. We get shaken up and then we pull ourselves in a bit and withdraw. Later, there can be another push for our energy to move outward into the world again. But when it’s time to regroup, it’s okay to regroup. It’s okay to conserve our resources through the winter and start pushing to grow and expand again in the spring.

Do you have questions or comments about this spread? I’d love to hear from you! Comment below or write to me at bonnie@tarotsalve.com.