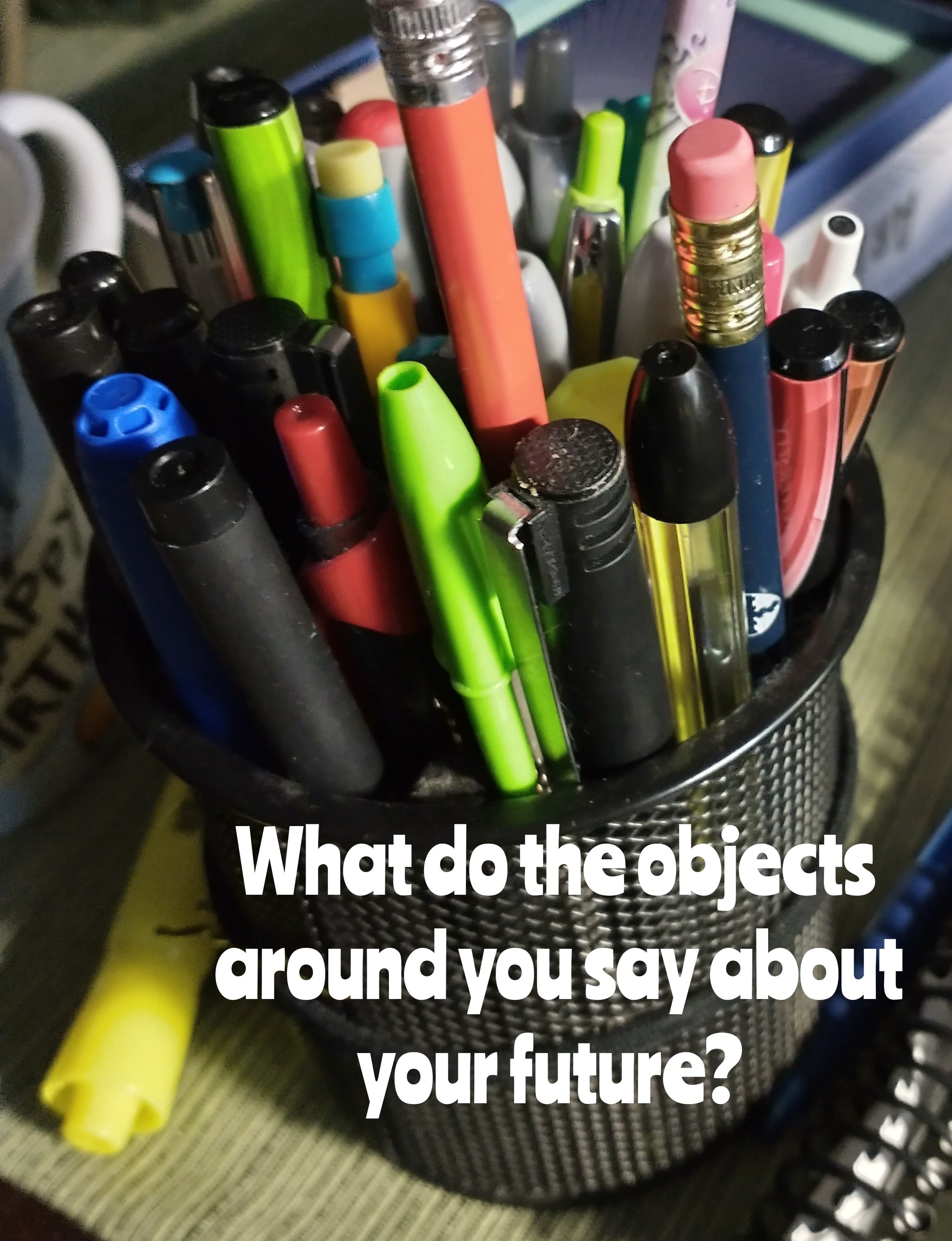 You know how, on social media, there are always quickie divination games that say things like, “the object to your left is your superhero skill and the color of your shirt plus the 42nd word on the page 5 of the nearest book to you is your superhero name”?

And you can’t resist it, can you? Let’s see, that would make my superhero skill LAST YEAR’S PLANNER and my superhero name would be Grey No. It’s a silly game, and I just made up that example. But the reason we can’t resist these games is that there is a tiny, tiny kernel of truth in them.

Once, while listening to The Hermit’s Lamp podcast, I heard Enrique Enriquez* say that you can divine your future in the objects you arrange around you. Or something like that.

Honesty is prophecy…This is what living with the oracle is. It finds expression in everything you arrange around you. -Enrique Enriquez

I took away from that observation the idea that you can change your future by arranging the objects around you in just the right way.

How beautiful is it when in the words of the wise you can find both divination AND magic?

And in this case, divination and magic that are both provable by science.

I will tell you.

But to get down to more detail: If you walk into my home, my surroundings should actually tell you a lot about what’s going on with me, what my personality is, what my situation (both financially and personally) is, and that should tell you, if you have any sense at all, where I’m likely to be heading. Again, divination and materialism agree.

Even at a “what’s going to happen to me in the next five seconds” level, I should be able to look around and have a pretty good sense of that. Is there stuff on the floor that I’m going to trip over? Are there groceries in the fridge? Did a cat just come over and yell at me? These signs are reasonable indications of what’s happening next. As Camelia Elias** might say, they indicate my positioning.

But a thing that also interests me about my surroundings, you see, is that they additionally indicate my frame of mind. Thus, as someone with severe ADHD, it seems reasonable to me that if I organize my surroundings, my mind will also become more organized.

Is there anything more important in determining your future than your frame of mind in this present moment?

If you can do things on a material level and those things have an effect on your brain and your mood, how can that not affect your future?

This is why you LISTEN to your “fortune” teller when they tell you to DO THE WORK and pay attention to the MUNDANE DETAILS. It’s not because these things make you more lucky; it’s because you have agency in your actual life, so what you do makes a difference.

If you put a little money in the bank every day, at some future point you will have more of it. And that will make your life materially better. Is that not magic? Money isn’t even real, you people. It’s not even a thing. It’s a made-up concept.

But it affects your position. Are you in range? Are you not in range? Of your goal, of the person you’re sparring with, of whatever. If you can’t reach the light switch, you’re going to have to get up to turn it off or on. If you’re writing a blog post that very few people read, then you may not be in range of whomever most needs to read it.

You can read more than one future in the objects around you because you have more than one future–your future is relative and you don’t live in a one- or even a two-dimensional universe. You live in a multiverse; while you’re reading this, other things are happening all around you and to you. (And you don’t even you, by the way, but we’ll leave the question of your existence or lack thereof for another day.) So, for example, my current surroundings affect various beings who share this space. But also, my surroundings affect me differently in different contexts that I can experience all in the same space since we’re so carefully quarantining: I might have my tarot hat on, my editor hat, my mom hat, my daughter hat, my figuring out my finances hat, my worrying about the plants hat, etc. And every material object around me has a different implication for a different hat. In addition, my sitting here and typing this is taking time and energy from other activities, with implications for those futures, and it’s making my joints get stiff so I’ll have to get up and walk around.

In fact, if I’m being 100% truthful, though I might not be happy about not getting as much work done as I’d like, my choices in how I arrange my world also indicate my true priorities, which might not even be the priorities that I tell myself are my priorities. My surroundings are asking: Is productivity even your true top priority? My home is actually arranged to support the flow of children and cats through it and the progress of my mental health, primarily, and to support my income-earning work, secondarily. If I allow my environment to, it will tell me this truth.

Likewise, my home is set up to allow three introverts sharing a tiny space to all still have enough alone time. If you follow me on Twitter, you may have noticed that I Twitter name (temporarily) to reflect that I’m becoming nocturnal. Someone recently told me that people feel better and do their best when they work during daylight hours–we’ve all heard that at one time or another. But when you’re sharing a tiny space with other beings, and you do creative work, and those beings have a tendency to wander in and ask questions like, “is there a plan for dinner?”, it does make sense that if you do a chunk of work late at night when those who are bound to school and employer schedules are asleep, your work is less likely to be interrupted.

Have you seen those tiny houses where one piece of furniture turns into something else, depending on how you’re using the space?

Magic. And/or divination. Because if I read the situation accurately, I can see: Bonnie, the night is offering you a gift of peace and quiet right now. (That’s actually kind of hilarious for me to say because my kids are not noisy and are quite independent. But still.) Meanwhile, overall, being in quarantine is offering you a gift of seclusion at what might actually be a really good time for it. So: the divination is in seeing the gift, while the magic is in gratefully accepting it and making good use of it.

And NONE of this is in disagreement with science. Not one word of it.***

Part 2 of this post, eventually, hopefully, will be about how this all applies to politics. Because I’m just one micro example and not a very important one. What happens when you apply a reading of the environment to the larger macro world? Well–then you find out why businesspeople and politicians are so superstitious. (Maybe.)

*The first link above is to that podcast; the second link is to a lyrical post by Enrique that I found while looking for a site to link to for you if you’re curious.

**This link is to her site; I couldn’t remember when/where I heard Camelia make this comment about positioning. Though I found lots of other interesting things while trying to locate it, including the post with the suggested spread in the photo below.

***Some of you will object by saying, “if science explains it, it’s not magic.” My dear children, all you are saying is that you personally define magic and science as not the same. That’s called circular reasoning and all you are proving to me is that you don’t understand logic.