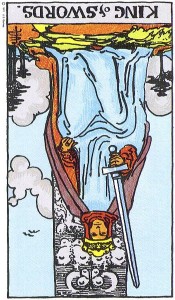 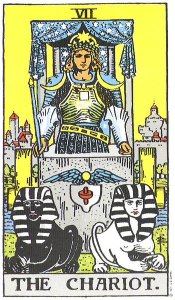 For some reason, a bossy, arrogant, opinionated man (The King of Swords) has his eye on us today–and he is not pleased. He is inclined to be judgmental, or at least skeptical, about our work. But that is mostly because he is out of balance and we happen to be around. He should focus on his own issues, because we are charging ahead (The Chariot).

Let go, be yourself, and don’t worry about what others think.

Alternatively, perhaps we are all Kings of Swords today–starting out the day cranky and critical, maybe even self-critical, and then uprighting ourselves and charging ahead.

Either way–damn the torpedoes! Because nothing is going to stop us.

There is a third possibility–maybe the Reversed King of Swords himself is going to charge ahead in his Chariot. If so, I’m still not worried–he will have to turn himself upright, and even accept the possible loss of dignity involved in getting himself down while wearing flowing robes, which would take a bit of a perspective shift, to climb in there. So I think it will be okay.