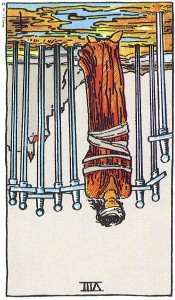 I hate it when the Five of Swords comes up–it seems to indicate a tricky situation that is hard to interpret–seems like someone has won something through underhanded means. Someone who has more stomach for immoral tactics than the people who are walking away sadly. But here, to complicate matters, we have the Five of Swords with the reversed Eight of Swords, which to me indicates self-liberation, a woman who is casting aside her bonds, pulling her cage of swords out of the earth, and going on her way.

How do these two cards relate to each other today? I feel that the Five of Swords winner has miscalculated. Maybe the Eight of Swords woman was one of his opponents. Maybe the swords lying on the ground are ones that she cast there after uprooting her cage of swords. And if so, I feel that she chose to walk away from this fight, and from engagement with a nasty negative person, recognizing one fight that truly wasn’t worth it. I feel that she has more constructive things to do — like building a new life around new ideas. So hurrah for her! And Mr. Five of Swords is going to find out later that his victory isn’t all that he thought it would be. In the end, the scorecard will show that she won this round — because women who take off their own blindfolds, untie their own bonds, and rescue themselves are forces to be reckoned with. I don’t know what she’s going to do, but it’s going to be something unexpected, and it’s going to be big, and it’s going to cause some dropped jaws from the people around her who thought she was going to be a doormat for the rest of her life.

But it won’t surprise us. Because we all had faith in her, didn’t we? Only a truly spiritual and powerful person willingly allows herself to be bound for a while temporarily. Haven’t you seen all those old martial arts movies? This person who allows herself to remain a captive for a time will defeat seemingly insurmountable odds with ease, later. You can count on it.