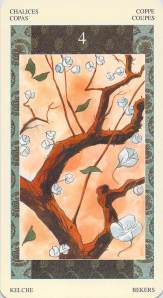 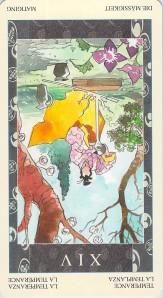 Are you feeling old today? That’s all right, because age has its benefits–and one of them is that the aging process can temper us. Aging hones us like a sword, to a finely polished, extremely sharp edge.

Why am I talking about aging? In the Samurai Tarot (from which I drew today’s cards), the Four of Cups is represented by an old plum tree, and is meant to be about cycles or seasons of the year. The Samurai Tarot’s book says of this card, “The old plum tree bares itself of the seasons, forgetting its inexorable aging.”

With the Four of Cups, we have Temperance reversed. In the Samurai Tarot, of course, temperance is connected to the tempering of steel to make a sword. This energy is blocked, today, and the card is reversed. But that’s not because we aren’t truly tempered or because temperance isn’t relevant to our lives. We ARE tempered. In fact, I am inclined to think that we might be prone, today, to losing our temper! But even when we lose our tempers, we are still who we are, at the age that we are at, and we are tempered (or purified, according to the Samurai Tarot’s book) to the point (pun intended) that we are.

Don’t regret your age, whatever it might be. Your age is what has tempered you and brought you to this point — and you are finely honed, whether you realize it or not.

Finally, a word of caution: the power of the finely honed sword is in you, so use it wisely, and don’t draw blood with it unless you have a very, very good reason. In fact, like the samurai, don’t draw your sword unless you are quite serious and plan to use it. Swords can be dangerous.