Things are not as bad as we think they are. The wounds that are unbalancing us are internal, not so much external. I know you’re thinking: “no, there’s some pretty serious external shit going on too!” I’m not disagreeing with you. But the external issues are a reflection of what’s going on within — to some degree. Today, pulling from the Yoga Tarot, I drew the Knight of Swords 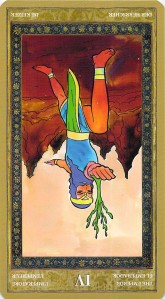 To me, the Knight of Swords, at least in this particular deck, is about being tied up in knots because of internal strife and worry. That’s true for many of us in this economy. But, although this knight is in eagle pose, the truth is that to fly like an eagle, you have to stretch out your wings, not tie them up in knots. That means taking time to look at the internal issues that are tying you up. Some fixed idea, something you rigidly believe, may have to be let go of. Something related to who you are fundamentally, what you do, and to family and security, and very likely also finances (at least, that’s what I conclude from the first chakra red of this yogi’s skin). And you will have to present yourself to others (throat chakra blue for communication is all over this card) as an eagle, not as a frayed knot.

This is important because we need that Emperor to be upright and in balance again, with his feet on the ground. We need to take control of our own worlds. I know you may not believe this, but it doesn’t start with your to do list, it starts with meditation and inner balance. Why? Because without inner balance you will just end up procrastinating or going off on wild goose chases, that’s why. Or crashing. Though you’re eager to get to where you’re going, don’t be so eager that you fly off in a not-so-airworthy plane. Don’t speed on the highway and get a ticket — that will just slow you down more. Do you see what I’m saying? If you are out of control on the inside, out of control stuff will happen on the outside. Even if you think you don’t have time, it is still important to take time for inner balance — the ripple effect will be a slowly increasing amount of control in your outer world, as well.

And one more point: don’t be obsessed with control. It’s necessary to give up the need to control everything in order to regain the ability to control some things.

What will happen when we turn the Emperor right side up? Notice the plant growing out of his hand. Once we are grounded and balanced, we can achieve growth. But not now, while our feet are in the air and we’re trying to do too much too fast.

Put in Star Wars terms (because why not?): Luke Skywalker has to go and train with Yoda before he can save his friends.