So, I’ve decided not to blog every single day about tarot any more. This will come as no surprise to all of you who have watched my blog completely and totally disappear over the last few months. But yet, I do still want to keep the blog current. So my plan is, in this space, to write about tarot much of the time, but also touch on non-tarot topics occasionally.

Because that gives me a chance to share this somewhat random but still worthwhile thought with you: Stand-up comedians are a national treasure. They are. Comedians should be revered throughout the land. They should be worshiped in churches. They should not have to pay taxes. That’s how much we should treasure the people who can make us deeply, sincerely, laugh.

And here’s the thing: it’s NOT because they’re funny. Funny, by itself, could be mean-spirited, or crude, or just…in poor taste. Funny, alone, could even be racist or sexist or ageist or homophobic. And I have to say frankly that I don’t appreciate THAT kind of funny.

So it’s not that comedians are funny, it’s that they are so gentle and such good sports. It’s because they look into the soul of even those people who are behaving contemptuously and see a glint of true humanity in there. It’s like Chögyam Trungpa Rinpoche said (in Training the Mind and Cultivating Loving-Kindness):

[The] sore spot on our body is an analogy for compassion. Why? Because even in the midst of immense aggression, insensitivity in our life, or laziness, we always have a soft spot….Whether we are crazy, dull, aggressive, ego-tripping, whatever we might be, there is still that sore spot taking place in us….That open wound is very inconvenient and problematic. We don’t like it. We would like to be tough….We would like to lay our trips on everybody completely and properly, so that we have nothing to hide. That way, if somebody decides to hit us back, we are not wounded….”

But, he goes on to explain, what we need is to be wounded. We need to be hit right in the sore spot, so much so that it widens until it encompasses our whole being. That sore spot, he explains, is “embryonic compassion,” “basic sanity.” Buddha nature is

“like a heart that is sliced and bruised by wisdom and compassion. When the external wound and the internal wound begin to meet and to communicate, then we begin to realize that our whole being is made out of one complete sore spot altogether, which is called ‘bodhisattva fever.’ That vulnerability is compassion. We really have no way to defend ourselves anymore at all. A gigantic cosmic wound is all over the place — an inward wound and an external wound at the same time.” 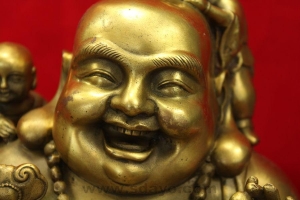 What good comedy does, to my mind, is to hit us hard right in that soft spot. To open us so that we can be warm and compassionate. So that we can be gentle and understanding.

“It’s very harsh treatment, in some sense, but on the other hand, it’s very gentle. The intention is gentle, but the practice is very harsh. By combining the intention and the practice, you are being ‘harshed,’ and also you are being ‘gentled,’ so to speak–both together. That makes you into a bodhisattva….You have to jump into the blender. It is necessary for you to do that. Just jump into the blender and work with it. Then you will begin to feel that you are swimming in the blender. You might even enjoy it a little bit, after you have been processed.”

“….Beyond that delight, we also tend to develop a sense of friendliness to everything. The early level of irritation and aggression has been processed through, by mindfulness and awareness.There is instead a notion of basic goodness….There is room to relax, room to open ourselves up.”

So, this is what I see, in the gentle humor of Louis CK or Kathleen Madigan or Wanda Sykes or Eddie Izzard or Gina Yashere or Ellen Degeneres, to name a few examples.

Or at times, Russell Peters. Or to go even further, Bill Hicks. Or Christopher Titus. Or, how could I leave out Dave Chappelle? Or Margaret Cho? Yes, some of these people are occasionally very crude. Many use profanity. But that doesn’t change the fact that this humor is GENTLE. There is this whole attitude, especially from someone like Louis CK, of, “I’m just trying to give you a little perspective here. Not trying to be a jerk. Just giving you a little bit, just a little bit of perspective. Just zooming out and widening the picture just a little bit.”

And that’s the essence of good comedy. It’s not that it makes us laugh. It’s that it gives us perspective. It puts us in touch with a wider view of things. In that sense, I don’t think it’s inaccurate for me to say that good comedians touch the face of God. They zoom you right out of your little narrow pin-sized view of the world straight out into a point of view that encompasses the universe. Or, it makes us bigger, by widening that wound until we are as big as the whole universe. Either way. Same thing. That’s what good comedy is. It makes the angels laugh.

And I don’t think the angels, or the bodhisattvas either, mind a little profanity. They’re aware of the profane. And if it’s put out there in a spirit of gentleness and good sportsmanship, I think they’re down with it. If it’s true that “guns don’t kill people, people kill people,” then it’s absofuckinglutely true that the F-word never killed anyone. Except comedically. In fact, in some cases, it’s when comedians are being their most profane that they are actually metaphorically speaking taking a crowbar and widening your perspective to its absolute limits.

So laugh a little today. And widen your view of things. If you feel like it.

P.S. I’ve tried to use clips here that I wouldn’t mind my kids seeing (for the most part). FYI…in case you are watching with kids in the room. But there is some profanity, so if you have a toddler who repeats everything he/she hears, you might want to use headphones.

and on being broke:

Kathleen Madigan on what really scares her:

Gina Yashere, Live at the Apollo:

Wanda Sykes on being gay versus being black:

and on politics (sorry, this one is  short some of the video–and sorry, as well, if you don’t agree with this particular view of politics–because I realize not everyone does):