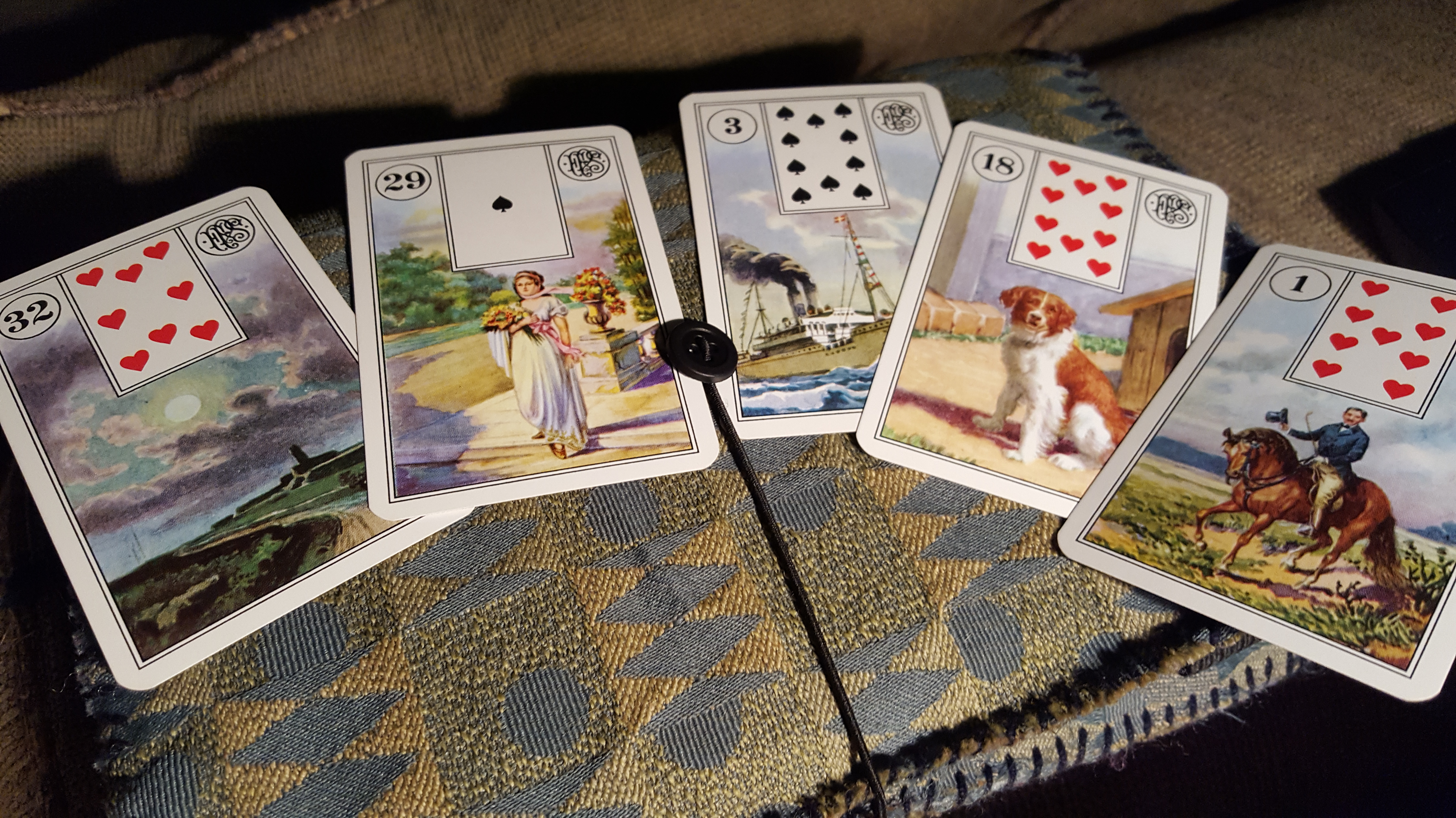 What do you do when you’re about to start reading a book described by reviewers as spine-chilling and unputdownable? If you’re me, you pull out your Lenormand cards and try to predict the plot. As one does.

Don’t ask me why I focus so hard on the predictive value of Lenormand when, for tarot readings, I focus more on what a querent might need to take away emotionally from the reading. I guess I don’t expect the Lenormand to heal? Regardless, I may be contradicting myself, but I don’t care, because this is fun.

Jo Nesbo’s The Snowman was recommended to me by my mother. I’ve never read Nesbo’s work before. I know nothing about Harry Hole–is he the detective? But perhaps this will become the start of a beautiful friendship…. 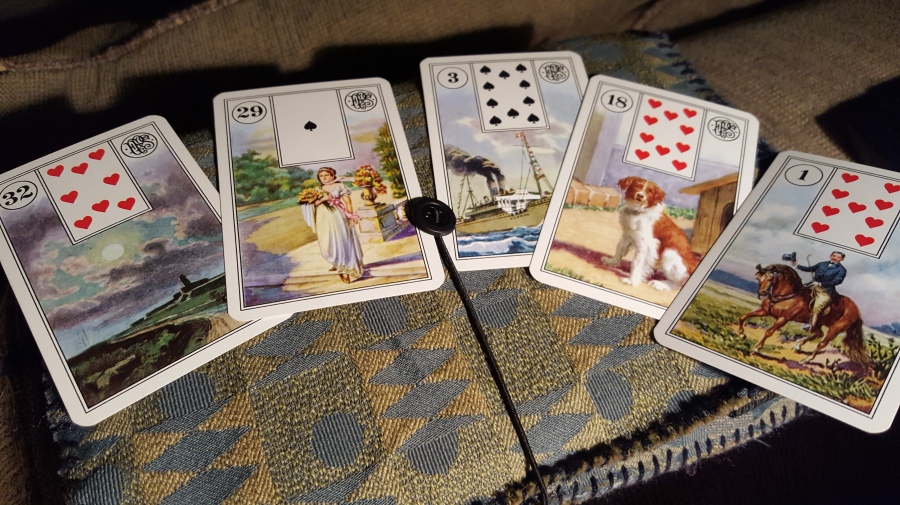 On to the cards: the Moon, the Lady, the Ship, the Dog, the Rider. At night, when the moon is out, a woman leaves to visit a friend. But someone else interferes: the Rider.

That’s all you’re getting from me. Two sentences. Because I’ve been working all day and I want to read, that’s why!

Please feel free to comment on these cards or to suggest future books for a Literary Lenormand analysis on the comments below.

So, I’ve finished the book, which gave me a nasty nightmare last night, by the way. But this novel was very compelling and had twists and turns I could never have predicted. Were the cards correct?

The Moon and the Lady. These two are unmistakably accurate: the murderer in this story is obsessed with the reputation (in the Lenormand, the Moon is connected with reputation) of women and their children.

The Ship. The first chapter involves a woman in her car with her child. The Ship is the closest the Lenormand can come to representing a car.

The Dog and the Rider. These are trickier–the Rider can often represent a lover outside a primary relationship, and that makes sense as a theme in this book. But I was looking for the plot. Harry Hole, the detective, is very dogged in pursuing this murderer, and he’s also a good friend–the Dog is an accurate representation of his character, I think. But again, I was looking for the plot.

And maybe, that plot is here in these cards. The reputation (the Moon) of a woman (the Lady), was besmirched, when her child, who had been left in a car (the Ship) saw her having sex with a man who he immediately concluded was his real father. Her child then–okay, I did say there would be spoilers–kills her. And becomes a serial killer of women who have children with men who are not the men they claim as the children’s fathers. Given all of that, I think these cards would have been more accurate if the Child had appeared after the Lady. The Lady’s reputation, the Moon, also drives the story forward (the Ship) toward the point where it encounters the detective (the Dog). Who incidentally is also appropriate for the Dog in that Dogs are loyal, and so is this detective–unlike the women who are being murdered, he is not a philanderer. In fact, he is still loyal to his ex, even though she has moved on. And who has she moved on to? The Child from the first chapter, grown up, has become the Rider–the lover who the detective’s ex gets involved with after leaving him. In terms of the order of the cards, the Dog hunts the Rider, even though he doesn’t know at first that the Rider is the Snowman murderer.

So I do see a lot of parallels between these cards and the plot of The Snowman. And I also see a parallel in that numerologically, the numbers on these cards reduce to 11, the Whip, which picks up not only on the theme of sex in the book, and on the repetitive action of a serial murderer, but even does a fair job of representing his weapon, I think (it’s not a whip, but it does loop–the Scythe might have been a better choice of a card to represent the weapon in this case, except that this weapon is not a hard piece of metal, but rather a loop of wire). But I could not EVER have looked at these cards in advance and told you, oh yes, here’s what will happen in this book.

And that’s a question that often comes up with both tarot and Lenormand cards: often we don’t see the full meaning of the cards until much later. After the fact, it’s easy to say, this card matches that event or that person. But before the fact, it’s difficult to hone in on specifics. What does that say about the value of a reading? I think that’s a topic that deserves its own blog post. Stay tuned.