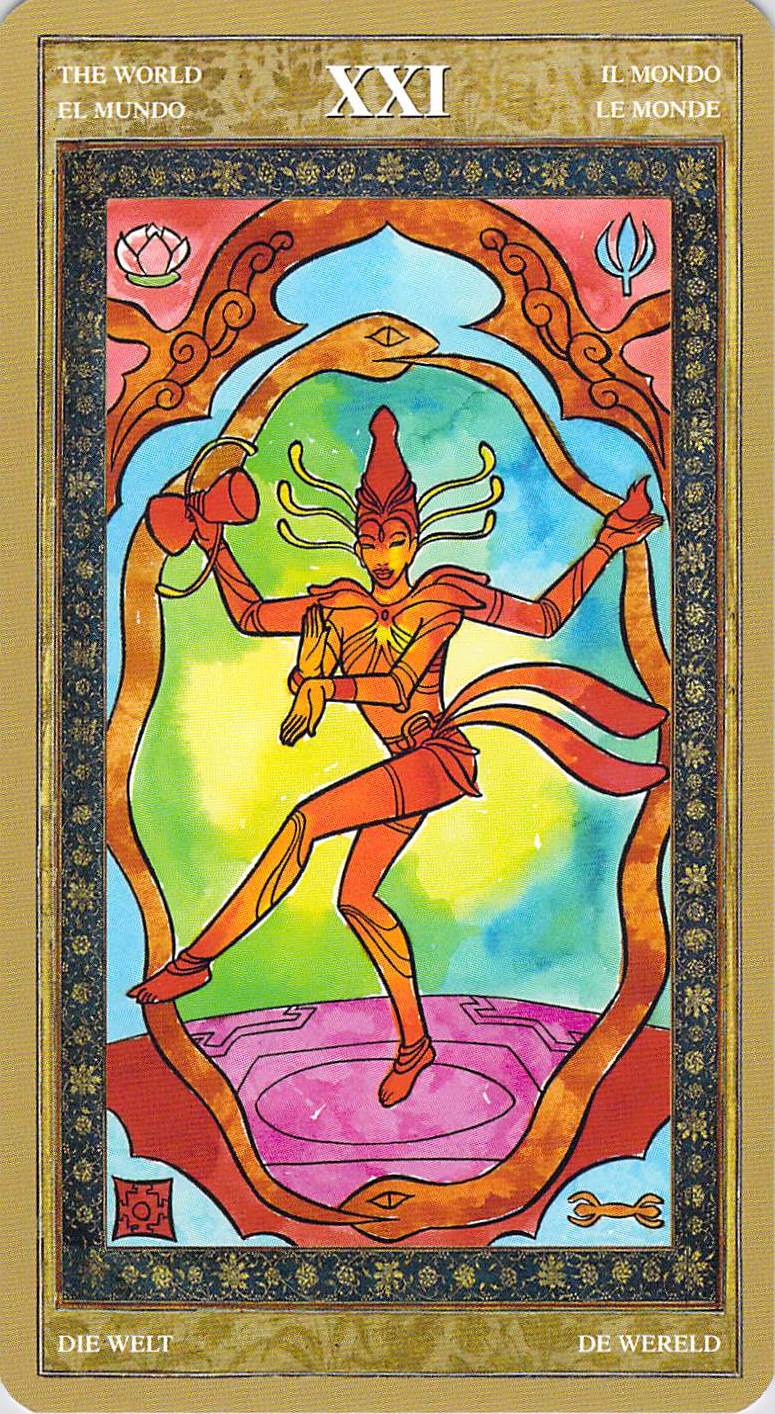 “I would believe only in a god who could dance….Not by wrath does one destroy but by laughter.” –Friedrich Nietzsche, Also Sprach Zarathustra

In the Yoga Tarot, the card for The World is represented by the Hindu god Shiva. I don’t know anything about Hinduism, so I took some time to read about Shiva before writing about today’s cards — and quickly was drawn in and delighted by his story, and by the story of his relationship with his wife, which is about the sweetest, most romantic thing I think I’ve ever read. But, I digress. In tarot, The World represents accomplishment, the completion of a cycle. Shiva represents both destruction and creation — the Lord of the Dance dances to destroy the world(s) and our ego-centered illusions, making it possible to create a new world based on essential goodness. Shiva’s destruction has a good purpose — it not only makes it possible to create anew, but it also purifies us by helping us to see reality in proper perspective.

The Seven of Chalices is a perfect match for The World in this deck — according to Lo Scarabeo, the deck’s creator, the Seven of Chalices represents action toward the world and solidarity with it, and asks, “Do I have the courage to give up my illusions?”

What illusions do you need to let go of today?

If you are having trouble letting go of illusions, the best remedy is meditation — and it turns out that Shiva is a master at this. The drum he holds in one hand makes the sound “Om,” and when Shiva is not depicted dancing, he is most commonly depicted meditating.

Are you looking for more practical advice about your day than this? Okay–today is not a day for lying, especially not for lying to yourself. Be honest. Look at each situation from all angles, including backing up far enough to see not only your own role in the situation, but the larger picture and how each person relates to it. Some veils should drop from your eyes right there! Strive with patience. Be glad for Shiva’s appearance — he is called the “Auspicious One,” and letting go of illusions, especially our most dearly held biases, is always auspicious, because these illusions are the very roadblocks that are preventing us from moving forward on our paths.