“…it is far too late to wonder if it is safe to put your toe in the waters of transformation when you are already far from shore.” –Rasha, Oneness

Welcome to another blog hop! This time we’re celebrating the fall equinox, with — appropriately as we head into the dark and dreary days of winter, gear up for Halloween, and watch everything green shrivel up and die — an exploration of the shadow self, and transformation. This topic sounds intense and serious, so why do I feel perky, like a cheerleader? Because I’m a Scorpio and Scorpios love, above all else, transformation. Dark nights and cold, gray, rainy days. Solitude. Caves. Snakes shedding their skins. All that stuff that the rest of the world thinks is a downer but that makes me want to shout, “hurrah!”

This blog hop is being wrangled by Aisling the Bard, who I suspect will cover the story of Mabon for you much better than I could myself. To find that story and to start the hop from the beginning, click here.

If you are going backwards through the blog ring, please click here to leap to Louise Underhill’s Mabon post.

If you are going forward through the blog ring, please click here to leap to Arjen Glas’s Mabon post.

Mabon is a Welsh hero who was stolen from his mother as a baby; he grows up and develops his skills apparently on his own — some versions of the story say that he was raised in the Underworld, and that he is the masculine equivalent of Persephone. He represents the “Shadow Self.”

Why would we want to fight the Shadow Self? Because you have to pay a price to liberate it. For example, if all those negative feelings are locked up in the Shadow Self’s keeping, and have not yet been fully experienced and processed and released, you will have to walk through them to let the Shadow Self out. Hello, pain. I was saving you for, um, now. Another example: If the Shadow Self holds the dream you want to pursue but haven’t, often the reason for that is that following that passion will take you down a path of poverty, a path that entails risk, something few of us really want to court, no matter how much we might talk a big talk about liking to live dangerously. Or the risk might not be poverty. It might be that people will think we’re crazy. Or that our families expect something different of us.

How’s that for a Halloween story?

Let’s illustrate this story with some cards. To me, four cards tell the story of the liberation of the Shadow Self. 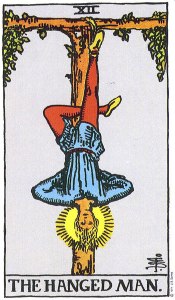 The first two go together: The Hanged Man, and the Eight of Swords. Both these cards represent the moment of inner change when our perspective suddenly shifts, and we realize that we have the power to liberate ourselves, or perhaps, that we are already free–we just didn’t realize it. This is an enlightenment moment.

What happens next? The Moon. Madness. Or, what looks like madness to others. We don’t care about the stuff we used to care about. We may not care about the people we used to care about. We may sink into a deep depression. But, bear in mind, depression is a potential spiritual gateway — it isn’t necessarily a bad thing. Depression is very often a part of the process of transformation. We should welcome it and dive into it to see what it can teach us — not necessarily fight it. Don’t get me wrong here: if you are seriously depressed and need psychiatric help or the support of a therapist, then get it — but, at the same time, bear in mind that what’s happening is spiritual as well — and you might be experiencing it for a valid reason. In any case, you can’t fight depression (and few depressed people have the energy to do so) — it will win. But what you can do, is accept the invitation to transformation. And yes, you can medicate depression, if that’s what’s needed, and still meditate and go within and see what your inner Shadow Self is trying to teach you.

What happens when you’ve walked through the madness and the depression? What lies on the other side of that gateway?

The Fool’s path, of course.

The path that your Shadow Self was jonesing for all along. And with it, beginner’s mind, the willingness to take risks, the volition to follow the path. Even if all you have to take with you are a few meager possessions and one loyal companion. It will still be worth it. Look! The sun has come out, and the air is fresh and clear.