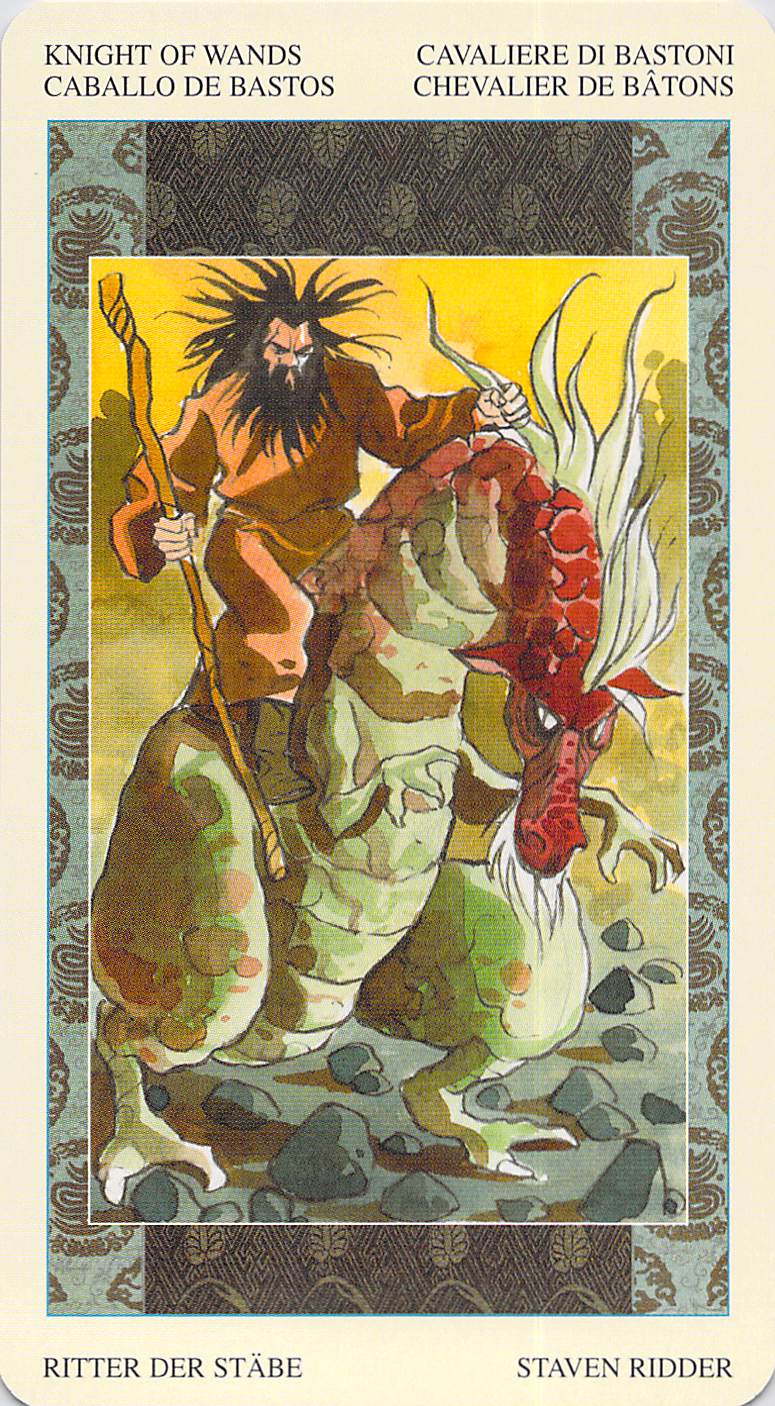 In the Samurai Tarot, the Knight of Wands is represented by Shoki, the demon hunter — and the Three of Swords, unlike the Rider-Waite version (which shows a heart pierced by three swords), shows a samurai who has taken off his armor and put down his weapons, in order to meditate. Let me just say this about these cards:

1. It takes great courage to set aside your weapons and armor prior to a battle.

2. The samurai did meditate, even though they don’t usually show that in the movies. Why? Not just to clear their heads, but because meditation is grounding. It is a way of drawing your energy in — like a cat about to pounce! 🙂

3. You can’t hunt demons (such as addictions or bad habits, whether they are your own or somebody else’s) with the usual weapons. Look at Shoki–practically naked–which means, what? Vulnerable. Don’t be afraid to be vulnerable when you go demon hunting. What weapon does Shoki have in his hand? Just a wand. Which means what? His enthusiasm, his good spirits, his cheerfulness, his positive energy, his willingness to do something totally crazy and possibly life-threatening, with no more to work with than his person and his personal fire.

4. Demon hunters don’t have to kill their demons. I never liked the idea of knights killing dragons anyway. Our personal demons come from our shadow side and they are part of us. Don’t kill your shadow self. Instead, harness it. See how Shoki is riding his demon? Our demons have something to tell us about moving forward on our path — and they may be the very thing that moves us forward on our path–once we get to know and tame them.

Just as an example–I am shy and quiet. I’ve spent my whole life having people tell me that I need to get past that and be more extroverted. Maybe some drama classes, you know. Toastmasters. Something. But it turns out that my shadow side was telling me that I need quiet and solitude for meditation and energy work. The very thing I was supposed to overcome is the the thing that it turns out my whole life and path depends on. Which raises a question: are your demons really demons? Or are they actually wise dragons? One reason we don’t need armor and weapons to fight demons is that what we need to do is focus on looking more deeply at them. No swords — just a nice pair of spectacles, please.