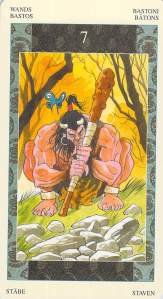 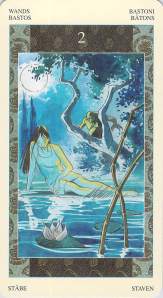 Today’s cards look like a day and night version of the same demon from the Samurai Tarot — and both cards are very different from their Rider-Waite versions (or are they?). The Samurai Tarot views the suit of wands as all about the battle with the self, and each card contains a ghost (or two) representing the samurai’s unconscious fears, desires, or weaknesses. For the Seven of Wands (evaluation — traditionally a card of using strong spirit to fight against the odds), the Samurai Tarot guidebook advises us, “There is no demon in the demon, no man in the man.” For the Two of Wands (prudence – imprudence) the Samurai Tarot warns us, “Behind the mirror of the inviting water, young girl, are hidden the fruits of your pride.” In the background of the Two of Wands card, you can see the demon sitting in the fork of a tree that represents the two wands — and the choices and planning that normally are a part of this card’s path.

The Two of Wands would seem like a clear warning not to be imprudent, if it were not for the Seven of Wands comment that “there is no demon in the demon.” We should not ignore our legitimate fears — but do we need to let them dictate our choices? Especially at night, under a full moon, when our fears might get the better of us. Besides, this card raises the question of whether the demon behind the girl is a threat to her, or IS her, or whether the girl, herself, is a demon (which seems likely for this suit and this deck). Why are there demons on these cards anyway? Remember that these “demons” (but, again, “there is no demon in the demon, no man in the man”) are our inner demons, the ones we must wrestle (or must we?).

I don’t view these demons, even the demon of the Seven of Wands card/background of the Two of Wands as negative. These might be aspects of ourselves that we don’t find pretty. But we aren’t here in this world to be pretty. What I see here are strength, determination, and the ability to stop and consider (gentleness, tenderness). Not demon aspects at all, really. And I don’t see the demon in the background of the Two of Wands card as preparing for an attack. He might as easily be in the scene as a protector, or be in danger himself of being lured from his path. (Is his choice, perhaps, a choice between following the girl, or turning to his inner wisdom, represented by the lotus?) Are our inner demons truly demons? (“There is no demon in the demon, no man in the man.”) Or are they simply different aspects of the personality that we can draw strength from when we need to? Is it truly necessary to give battle? Or is fighting these demons simply a form of self-sabotage and a total waste of our strength, our passion, our endurance, and our fire? Look what strong allies we might have if we make these demons our friends.

How? Note another parallelism/nonparallelism between these cards: the foreground. Each card uses its foreground to give us some help. In the foreground of the Seven of Wands, we have a pile of stones, calling on us to use the strategy of grounding (just as in the traditional Rider-Waite version of this card, the figure on the card uses the Earth itself, in the form of a hill, to help in the battle). In the foreground of the Two of Wands, we have water (emotions and intuition, or possibly a lake of wisdom), and a lotus (enlightenment). So we have here two forms of assistance in dealing with our own demons: grounding (which should be a major part of any battle), and accessing our own inner wisdom (which should be a major part of the planning process).