Who can resist trying to predict the outcome of this election? I can’t. So without further ado, here is what I think, based on the tarot (in this case, the Osho Zen, supplemented with Magpie Oracle Seer Charms). 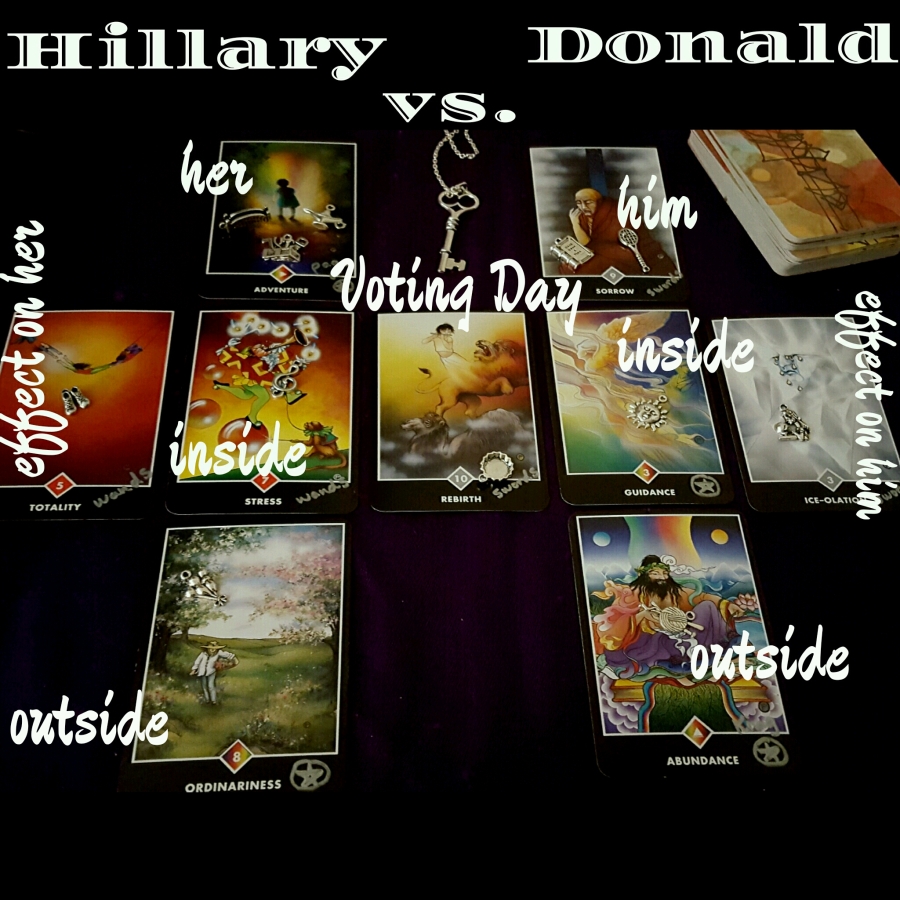 Looking at the photo, you can see that the spread looks like an H. That’s not because I’m a big Hillary supporter (although I am!). That’s actually just my standard relationship spread. I didn’t think about H being for Hillary until just now, I promise!

Looking at Hillary’s cards, on the left, you can see that she is certainly feeling the stress. At the same time, though, this is a big adventure to her, and it’s an adventure that she knows how to work at. So she’s going through the motions and doing the work (see that Ordinariness card?). But she also genuinely finds some fun in this. She likes working hard at politics. I also see work represented in one of her charms: the toolbelt. The charms also reveal something more: the musical note for her inside card makes me think about her rallies with musicians, and the balloon charm makes me think about her campaign preparing for a victory celebration.

Poor Donald, though! And I mean that. Even if he wins, I feel bad for him in terms of how hard this election has hit him. He appears as Sorrow, the Nine of Swords. He’s trying to play by the book (charms: tennis racket and book), and he’s cooperating with his advisors (Three of Pentacles: Guidance–and to me, the Three of Pentacles almost always signifies cooperation, as well–people working together.) He’s doing what he always does on the outside, portraying himself as the King of Abundance–sorry, the King of Pentacles. But really, he needs some busy work, like knitting (see the knitting charm?) to keep his mind off his anxiety.

But the really sad thing for Donald is that win or lose, he’s stuck in Ice-o-lation (the Three of Swords). He burned too many bridges in this campaign and now it’s going to be hard to reach out to people to work together with them in the future. Hillary, on the other hand, has been building bridges (she has a bridge as one of her charms, too).

If Hillary, wins, though, it’s not going to be easy on her, either. Her effect card is the Five of Wands, which often involves a struggle and competition. The Osho Zen portrays it as trapeze artists at work. Her charm for that position is shoes–and indeed, if she wins, it’s time to stop talking the talk, and start walking the walk. And it’s not going to be easy at all–she will spend much of her time swinging on a trapeze between right and left, or walking a tightrope.

But who do I think is going to win? I’m leaning toward Hillary, but just by an edge. This is a close, close call. And the reason I’m calling this for Hillary, at this point, is the effect cards in this spread. Donald going into isolation, Hillary working hard and walking on a tightrope–that sounds to me like a Hillary win, even though it may not sound like that much of a win!

Why do I think it will be so close? Well, as a Buddhist, I’m partly looking at the rainbows on these cards. Both candidates have rainbows. And Donald appears externally as the King of Pentacles, which threw me for a few minutes, but then I remembered that that position represents his actions–not his outcome. And Hillary as the Page of Pentacles–she has stuff to learn as President, and she’s eager to learn it. She has the beginner mind for the job, despite everyone thinking that she is a pro-establishment candidate.

Let’s look at the Voting Day position: Here we have–oh fun!–the Ten of Swords, Rebirth in the Osho Zen. And a bottle cap. So, I’m thinking, lots of alcohol will be drunk on Election Day and many bottles will be opened. Nobody is going to bed early. (Sorry!) But rebirth–that’s a good thing, for the country. Because we really, truly will FINALLY put this election behind us and come together again as a people–at least we will start that process. No matter who wins. And that’s definitely good news no matter what side you are on.